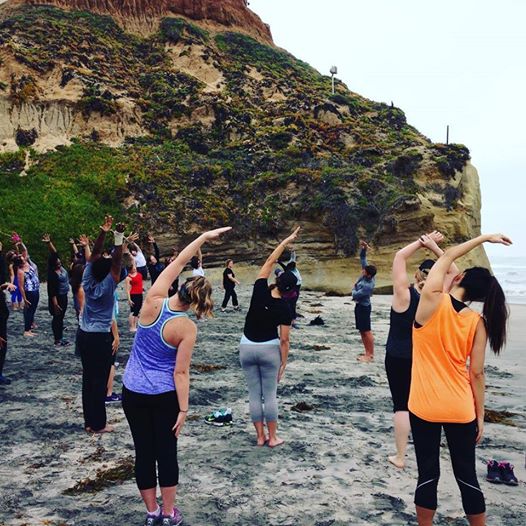 FitBit Local has been quietly gaining a large following in San Diego County with active outings at different locations each month.

This morning in Solana Beach a crowd of almost 200 people showed up at Fletcher Cove Beach Park to be lead through a “Beach Bootcamp Workout” and Yoga session by FitBit Local Ambassadors Mike Sherbakov and Sheri Matthews.  Mike and Sheri had attendees smiling, sweating, hugging, appreciating and giving high fives.

Not only were attendees feeling good, they were also doing good – as FitBit Local was taking donations of yoga mats for the great organization Yoga for the Homeless.

Joining FitBit to sponsor the events were local companies Perfect Bar and Suja Juice who provided tasty and healthy refreshments after the event.  Side Note:  Suja Juice was also a big hit in the media room at Natural Products Expo West last week!

This is a really a great feel-good group to be part of – and everyone is welcome no matter their current level of fitness!  (there were even a couple of pregnant ladies there ….). Fitbit Local’s next San Diego event has not yet been posted, but it is rumored to be a hike at Cowles Mountain in April.  You can check page for Fitbit Local San Diego so you make sure not to miss it.

Hope to see you there!