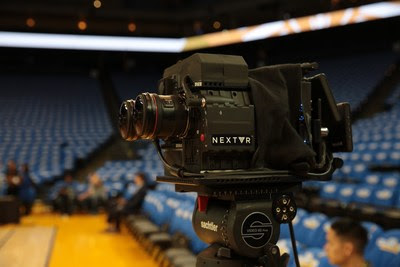 This marks the first time a college basketball tournament will be broadcast live to a global audience in virtual reality. In total, seven games and more than 15 hours of live virtual reality coverage will be streamed over three days.

Basketball fans who experience FOX Sports virtual reality coverage of the 2016 BIG EAST Men’s Basketball Tournament will feel as if they are watching the game amongst the fans in courtside seats. The immersive, high-definition views will bring fans to center court, near the sideline player huddles and under the basket for an experience unlike any other in sports. The live virtual stream will include audio and graphics highlighting player stats, scores and game updates.

The first-of-its-kind relationship between NextVR and FOX Sports will broadcast a range of top sporting events in virtual reality where FOX Sports holds the broadcast rights. In February, NextVR and FOX Sports launched the joint effort by bringing the Daytona 500 to virtual reality, just weeks after broadcasting a Premier Boxing Champions (PBC) fight together. In 2015, FOX Sports, through its FOX Lab initiative, and NextVR also tested the U.S. Open from Chambers Bay.

“Fans want to be a part of the action and virtual reality takes the fan experience to the next level,” said Eric Shanks, FOX Sports President, COO & Executive Producer. “Our relationship with NextVR comes at a time as the demand to enjoy these amazing ‘like being there’ experiences expands.”

About NextVR: NextVR enables the transmission of live, long-form virtual reality content in broadcast quality – leading the way for live and on-demand VR to become a mainstream experience for sporting events, concerts, cinematic productions and more. Launched in 2009, NextVR has more than 26 patents granted or pending for the capture, compression, transmission, and display of virtual reality content. NextVR’s platform allows the fully immersive content to be streamed with pristine quality using current home and mobile Internet connections. NextVR was founded by veterans in stereoscopic imaging technology, software development and an award-winning filmmaker.  For more information, go to www.nextvr.com.