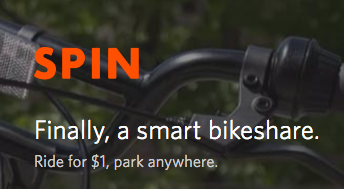 Spin, a stationless bikeshare company in North America, today announced it is the first company to obtain a stationless bikeshare permit from the City of Seattle and is officially launching a city-sanctioned bikeshare fleet. Starting today, 500 of Spin’s orange-colored, GPS-enabled, self-locking smart bikes will be distributed across the city to provide an innovative, equitable mode of transportation for the people of Seattle. Unlike traditional bikeshare systems, Spin’s technology requires no fixed racks and allows bikes to be parked anywhere legal and responsible.

Following the company’s $8M Series A funding round in May, just months after the company’s founding, Spin’s Seattle launch continues

the company’s rapid growth trajectory and marks an important milestone for stationless bikeshare in the United States, as the model gains traction around the world. Spin is planning launches in several major U.S. cities this quarter, including San Francisco and New York.

“We could not be more thrilled to launch in Seattle,” said Spin co-founder and CEO Derrick Ko. “Our policy team paved the way for the nation’s largest city-sanctioned stationless bikeshare program by leading industry discussions and working closely with the Seattle Department of Transportation every step of the way. Together, we brought bikeshare back to Seattle residents with an affordable, equitable system that won’t cost the city a penny.”

Spin will scale up its Seattle operations over the next four months with the goal of ultimately deploying more than 10,000 bikes across the city’s many neighborhoods. Spin plans to hire a local team of up to 20 in marketing and operations to ensure high service standards during this expansion.

“Spin’s launch in Seattle is a breakthrough precedent and proves that North American cities are excited to work with stationless bikeshare companies,” said Euwyn Poon, Spin co-founder and president. “The support we have received from Seattle residents has been overwhelming, and we have assembled a world-class team of business, policy, and engineering talent who believe strongly in our mission to continue our rapid expansion.”

Spin helps people move around in cities by offering a convenient, affordable, and environmentally-friendly mode of last-mile transportation. Its fleet of GPS-equipped, orange-colored smart-bikes can be unlocked by scanning a QR code, and can be dropped off anywhere, all at no cost to cities. Spin raised an $8M Series A to launch across North American cities and campuses. Spin is led by a team with experience from Y Combinator, Lyft, Uber and other technology companies.