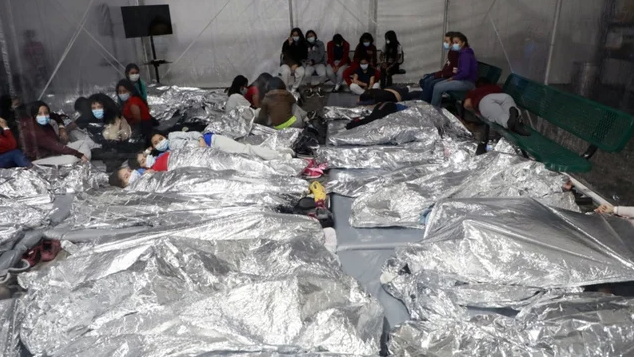 Although many people are trying to ignore it and pretend it is just a “myth” like Jerry “No Nads” Nadler said about Antifa, Biden’s Border Crisis is a true crisis – humanitarian and otherwise. Some people like fake VP Kamala Harris are still attempting to blame President Trump for the results of the actions of fake President, Sleepy, Creepy, Quid Pro Joe Biden. There is no denying that Joe Biden invited foreigners to surge to our border once he was illegally installed as President – there is video to prove it.

Well Biden’s idea was definitely not a good one – not for many of the people who did surge the border – and certainly not for the United States and our citizens. The Harris-Biden-Obama Administration is flying and busing thousands and thousands of illegal immigrants all over our country. They are taking jobs that Americans badly need and draining resources of cash, food and shelter that could be being used to help the surging homeless populations in many American cities – including homeless Veterans who have made great sacrifices to keep our Country free and safe.

It’s recently come to light that there are illegal immigrants flooding our southern border from all over the world – not just Mexico and Central America. There have been reports of many people coming from Sudan, Iraq and many other places. How many of these people are coming because they love America and how many are coming here to cause us harm? The way that the Harris-Biden-Obama ‘administration is not even documenting them, there is no way of knowing. No way.

What about this “pandemic” we are supposed to be fighting? Why would most of our country be on full lockdown for over a year, with Biden, his cronies and the scumbag media now pushing dangerous vaccines – all while allowing and in fact encouraging illegals to surge our borders and not even test them for this killer virus they call Covid-19? Shouldn’t they all be getting vaccinated? They are in fact getting cash, free transportation and housing.

Here is the Mockingbird Mainstream Media brainwashing Americans – This MUST Stop NOW!

What about the thousands and thousands of unaccompanied minors who have been sent to our country? Sometimes they are sent by short-sighted parents, other times they are sent by the drug cartels and then dispersed around the country wherever the “phone number written on their hand” is answered. How many of these kids are being used – or will be used in the future, to smuggle deadly drugs into our Country? How many are being delivered to perverts and pedophiles in illegal and highly immoral sex trafficking supported by the Biden government?

In my mind, all these issues could have even more devastating effects on our Country and the American people. But the issue with the biggest potential to cause a bigger epidemic, ruin more lives and kill more Americans is that tons and tons of highly deadly drugs are continually being allowed to flow into the United States. Sadly, this really has the potential to spiral out of control very quickly and add to the drug problems already being experienced across our nation. Can you imagine having 20, 30, 40 or even 50 plus cities in the US with problems like Seattle, Portland, San Francisco, Los Angeles, Minneapolis and New York? It could get even worse and fast.

What do YOU think is the biggest problem being caused by the Biden Border Crisis?

Please leave your vote in the comments below – I am sincerely interested in what other people are really thinking about this subject. We definitely are not getting the real story about Biden’s Border Crisis or is effects from the fake news main stream media.

While you are at it – please let us know your opinion on why these crazed politicians want to pull our country apart.

[…] What is the biggest problem caused by Joe Biden’s Border Crisis? […]

[…] taking more than one job to make ends meet, with the Soros-Obama-Rice Administration (aka the Harris – Biden Administration) causing havoc with rising prices, shortages and […]