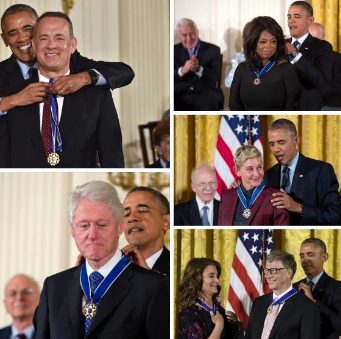 What do all the people have in common, beside being awarded the Presidential Medal of Freedom Award by Barrack Hussein Obama? It may be interesting to note that Robert De Niro, Bill Gates, Ellen Degeneres, Tom Hanks, Meryl Streep, Barbara Streisand, Steven Speilberg and Oprah Winfrey have supposed to been on the flight logs from the Lolita Express to the late Jeffrey Epstein’s Pedophile Island.

You notice that none of them look very happy, with the exception of Bill Gates and Tom Hanks, neither of which are looking like their real selves (body doubles perhaps). It’s also of note that Obama bestowed this same award on a record number of people – including Bill Clinton and Joe Biden.

Perhaps the Medal of Freedom that Obama bestowed on them is really a symbol of the lack of freedom they actually have? Perhaps someone has some dirt (video, photos and more) on them participating in illegal activities, maybe even in sickening crimes involving child trafficking and abuse?

Maybe they are currently owned and controlled by the dark side? Maybe this dark side deep state cabal has been using these people in their grand efforts to perpetuate crimes against humanity?

The good news is that with the arrest of Ghislaine Maxwell, and the great work of the Trump Administration, US military and officials around the world, Child Traffickers are in for a world of hurt. Don’t be too surprised to see some of the above Presidential Medal of Freedom Award winners indicted, arrested and prosecuted to the full extent of the law.

Some people think it is already happening, with unsubstantiated rumors that Ellen Degeneres and Oprah Winfrey have both been on house arrest with ankle monitors for at least a couple of months.

There is also a rumor that Tom Hanks was arrested and some even think executed – he has not posted on social media for some time – which is not like him at all. (“Hanx” has been long accused as a pedophile by many people, including Hollywood insiders like Isaac Kappy who mysteriously “committed suicide” on Route 66 after accusing Tom Hanks, Steven Spielberg, Seth Green and others of being pedos.

In my mind the real question is not if they did terrible things that are being held over their heads. The real question is what made them do them in the first place? Was it a lust for money, power and sex? Or are they non-human monsters or deciples of Satan?

IF they are indeed still human, they need to admit ALL of their crimes, testify against those who are controlling them AND ask for forgiveness. As humans, we need to be compassionate to everyone.

The fight is real. Good vs. Evil. It is now and always. Now is time for the next GREAT AWAKENING! Where We Go One, We Go All!

[…] post about the Obama Scandal: Awarding Medal of Freedom to Creeps and Suspected Pedofiles included a graphic which was a partial list of people who had reportedly flown on Jeffrey’s […]

Which can be faked, why fall for such nonsense?

Yes, Dottie – you are right. The flight logs for Jeffrey Epstein’s Lolita Express jet to his private Pedo island, could indeed be faked. So could Epstein’s suicide. As well as the stories of all the girls who were underage at the time they were abused. But if that was true, while would many of the people on the list be getting so very upset and cancelling their plans for the rest of the year? Personally, I’d like to think if there was child trafficking and child abuse that EVERYONE involved would be punished to the full extent of the law – they deserve it.

These conspiracy people also think the Parkland School shootong was fake! I. don’t believe the parents who buried their children would agree. Typical right wing jibberish.

Thanks for your comment and opinion Dottie. I’m not sure all “these conspiracy people” can be lumped into one group – in fact, I know we can’t. We all think for ourselves, do our own research and decide what to believe on our own. We definitely do NOT rely on MSM (or anyone else) to tell us what to believe. I don’t know anyone who believes the Parkland Shooting was fake, but there be more to the story than we are led to believe. Not sure myself, I’ve never really even read about it.

I personally do think that very soon, most of us will get some news that causes us to rethink almost everything we know. Regardless, I wish you the very. Stay healthy, live happy and be prepared.

You need to look at all the 70,000 tweets Chrissy Teigen deleted recently and then tried saying she’d been hacked for 11 years. lol… Who would take that long to discover being hacked?There are real sick people in this world, theyre discovered everyday. Just because they’re famous or in powerful positions does not mean they dont have demons that haunt them. Humans are flawed and just as serial killers seem normal most of the time to their family and friends doesnt mean they can’t have dark secrets. Jeffery Domer for instance. Truth is that nobody wants their dark side discovered and most will do anything to hide it. Not about conspiracies and i hate when people politicize everything. It’s about good and evil and those children who have pieces of their soul missing forever deserve justice and deserve to have the chance to tell the truth. So sick of the dismissal and constant efforts to distract from the true issues in this world today. please at least research and find out for yourself. Things def arent what they seem.

Yeah, that Chrissy Teigen definitely has problems. It seems like so many people (especially in government and Hollywood) felt like they were untouchable, but now they are starting to see what’s coming and they’re scrambling like the cockroaches they are! The cannot stop what is coming!

I always felt it would be unpopular to admit my hatred for Ellen, Seth, Tom, and even Oprah along with others. I just always get there was something not right about them like they are different off camera and not in a nice way. I hope NO ONE gets out of this easy. I agree they must be prosecuted to the full extent of the law but we already know how it goes for the Clintons. I’d love to see them behind bars and the Clinton Foundation shut tf down once and for all! Hoping the names Harvey dropped lead to more arrests though as part of the deal he will only serve 23 years now. He may very well die in prison. Hm

That’s true Kathryn – there are still A LOT of people who still love those ‘celebrities’ and probably always will – not realizing the full extent of or damage done by their misdeeds. For people to become truly awakened, they must be shown the truth so that they can begin to understand – and I believe that will be happening soon.

As far as what has happened to these people, I don’t believe that they were born evil, but that they have somehow become possessed and controlled.