Is John F. Kennedy Jr. the Q Behind QAnon? 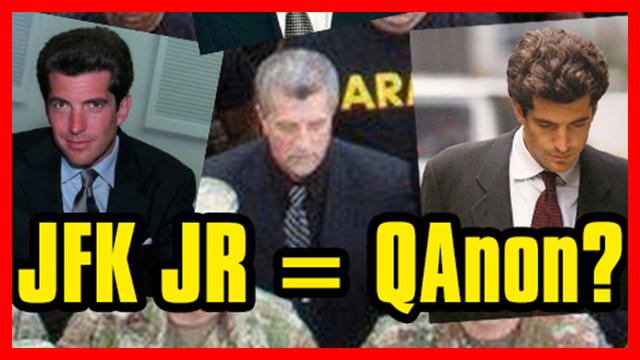 QAnon Patriots and Q ‘Conspiracy Theorists’ are missing posts from ‘Q’ aka the 17th letter of the alphabet, since the last drop, Q post 4260 on July 31, 2020. Some, including Charlie Ward, the Spain-based Patriot who has become a YouTube sensation, seem to believe that we won’t be seeing many or any future drops from Q. Charlie said on one of his videos the other day that he thinks the Q messages will be sent via different social media channels through 6 or 7 members of the Q team.

There seem to be a growing number of people who think (and really want) that Q is actually John F. Kennedy Jr. who is still alive. Many believe that John John faked his own death and those of his wife and sister in law to avoid being Arkancided by Hillary Clinton, so that he could come back and avenge his father and uncle’s assassinations by the CIA (aka Clowns in America).

Perhaps John F. Kennedy Jr. and his good friend, current US President, Donald J. Trump are nearly ready to pull off their plan to rid this planet of the Deep State and all their pawns and masters? The way that the Deep State, democrats, DNC, MSM (main stream media) and Big Tech are attempting to destroy everything our country stands for, all Q Patriots would love to see JFK Jr. pop out just in time for all the Durham indictments of Barack Renegade Obama, Sleepy Joe Biden, Susan Rice, Sally Yates, Jim Comey, James Clapper and John Brennan and everyone else who was involved in the treasonous, illegal spying of Donald Trump’s first presidential campaign, as well as his incoming Presidential administration.

Who wouldn’t love to see John F. Kennedy Jr. reappear, just as indictments are unsealed against all the politicians, power players and Hollywood better than you types who have been involved in human trafficking and crimes against humanity – including pedophilia at Jeffrey Epstein’s Pedo Island and other locations around the world?

I have to admit that I never could fathom that child trafficking could ever be the HUGE problem that is apparently is, but regardless of the numbers, even one child being abused or trafficked is too many. I heard a stat today that over 22,000 kids go missing EACH DAY around the world – and this breaks my heart. EVERYONE should want to come together, solve this problem, and rid our earth of the evil that contributes to that. I cannot even call them evil people, as my belief is that they are either real monsters, devil worshippers or have been possessed by evil demons. Anyone involved in that sort of thing is no long human.

A couple of things are definitely clear: