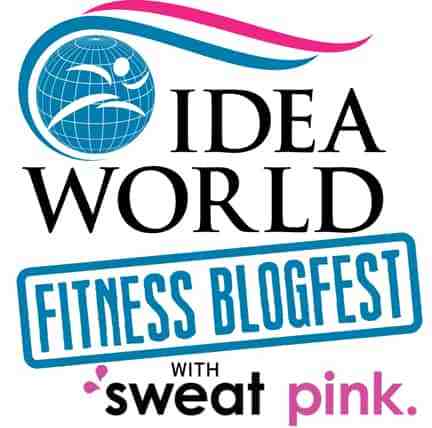 Last week Idea World held their annual Fitness and Nutrition Expo here in my hometown of San Diego, aka “America’s Finest City”.  It was a huge success.

I had planned to attend Fitness Blogfest, which was a side by side event with sweat pink for bloggers and influencers and was so excited, I was among the first to pick up my registration materials the day before the event started.  Unfortunately, my bubble was burst when I looked inside my registration packet at the info which said “In response to attendee requests and to preserve the educational atmosphere of the convention, children under the age of 18 are not allowed in sessions.”  That meant that this stay at home dad of a two year old, would not be able to attend ANY sessions …  Needless to say, I was quite bummed out that my plans would have to change and would not actually get to be part of Blogfest.  I was really looking forward to meeting a bunch of the other fitness bloggers and influencers, but that was not going to happen at this year’s Blogfest.  I wish I would have known earlier that children were not welcome – I did blog and post earlier about bringing Ava Kalea with me to Idea World’s Fitness Blogfest and nobody clued me in to the fact.

Instead of arriving at the Expo early in the morning and working out on the beach with Blogfesters and then attending some super interesting sessions, Ava Kalea and I ventured down to the convention center at a more leisurely pace in the afternoon, about an hour after the expo hall opened up.  We spent a couple of hours wandering the aisles of nutritional and fitness products – gathering samples and talking to reps.  I really enjoyed meeting Dr. Dan and some of his staff from Fitness Genes and seeing Billy Blanks from Tae Bo fame holding a #throwbackthursday Tae Bo workout.  It was also good to speak with the super nice people from Solana Beach – based Hylete – which makes some of the best fitness clothing on the planet and is just releasing their first shoes ever …. (click here for $20 off your first order).

I somehow missed the people from San Diego-based Kettle Gryp, which I was bummed about, because I bought a Kettle Gryp a couple of weeks ago – I’ve been using it a lot in some of my workouts and was thinking about getting another one.  (I was also hoping that they may eventually make one that will work with Ava Kalea’s 2 & 3 lb dumbbells).

There were a few things that surprised me about Idea World’s Fitness Expo, even more than the condition Billy Blanks is in at the glorious age of 62.

What I Learned from Idea World Fitness Expo and Blogfest

I’m not sure why you expected that children would be welcome at a professional bloggers’ conference. Could it be, perhaps, that because most of those bloggers were women? Most of whom, by the way, are mothers who made arrangements for their child’s care ahead of time. Saying that they “are not parents and/or don’t like children” is pretty ignorant and rude.

Yes, it is true that the members of Sweat Pink are mostly women (surprise!), but, as one of the people who reached out to you after your first post (not apologetically, by the way), I know that we are inclusive. Just ask the other men who, after finding child care, attended Blogfest. As for us using the words “ladies,” women,” etc. welcome to our world. Women have dealt with being an afterthought in a man’s world for eons.

Thank you for your comment Debbie – and for calling me ignorant and rude. I also appreciate you letting me know the policy about children after reading my first post saying that I’d be there with my baby girl …

I’ve never been to a single conference – BlogFest or otherwise – where children are allowed in educational sessions. As a working mother, I’ve accepted this and made arrangements for childcare. I never assume my children are welcome anywhere. This is parenthood and how it works, and it’s not a slight against children, no matter how well-behaved they are. And yes, many of us are parents – some of us are even grandparents.
As for BlogFest itself, if you had come with an open mind, I think you would have found that it’s a very welcoming environment- yes, even for men. If being in a female-dominated group bothers you, it’s going to be very difficult for you as your daughter starts school and you get involved in those activities. For reference, the “dance dads” at my daughter’s studio are nonexistent. They’re car service to the girls.
Finally, as a fitness professional, carrying judgement about other people’s fitness levels and saying they don’t belong at a fitness expo is the exact opposite of what we should be doing. We don’t know where they are on their fitness journeys or what their stories are.

Hi Christine – thank you for your input – and your view of parenthood and how you think it works.

It sounds like you have a very skewed and judgmental view of fathers in your daughter’s studio. Perhaps they don’t hang around because of these types of views?

Regardless, I don’t plan on having a difficult time at all – I fully enjoyed taking my teenage daughter to all her activities when she was younger – as well as volunteering in her school and on field trips – and taking her to and from school.
For the record, I cannot personally judge anyone, as I do not know their journey and have not walked (or ran) in their shoes – but I do KNOW that people who have more energy and higher fitness levels are probably better fit to represent and sell health and fitness exhibitors than those who don’t.

Did you ever consider taking accountability for your actions and behaviors?

Children are not allowed in ANY IDEAWorld sessions–this is not exclusive to Blogfest. This is the case with EVERY professional conference I have been to. Expecting others to alert you to this? Why didn’t you find out if bringing children was an option before you assumed it was OK?

You came into the group and had a negative attitude toward the event. In spite of that, people tried to reach out to you and include you. I question why you would want to be a part of an event next year when you didn’t have a positive attitude about it this year.

As for judging people’s body types, in addition to what Debbie and Christine posted above, consider that for some people, seeing someone who IS NOT a hard body makes it feel like there is space for them to work on their fitness, too. There are plenty of slim, unhealthy people and plenty of more shapely people who are VERY fit. To only judge a book by its cover reflects on YOUR LIMITED view of fitness. Why would someone want to work with you on their fitness journey when you judge them solely based on a visual assessment?

As for comments that start with “ladies”… you don’t see women pitching a fit when someone addresses a mixed group as “guys” or even “gentlemen” (and yes, this has happened to me many times). Overreacting much?

You get what you put out there. If you come in with a negative attitude, that is exactly what you will find. Perhaps it’s time to take a look inward and see how your own attitude and behaviors contributed to your experience.

Hahahaha – “overreacting much?” – right on target Briana! Thank you so much for your time, thoughtfulness and overall kindness. I really appreciate you and the other people who took their valuable time to comment! Y’all really put me in my place ….

Hi Joe – so very nice to meet you. My name is Jamie and I’m one of the organizers of BlogFest. I’m also a business owner, and a mom to a beautiful 13 week old baby boy – Colby James. I look forward to BlogFest every single year, it’s one of my most favorite weeks ever – it’s chock full of education, opportunities to network, and of course great workouts – and I’m so sorry you missed out on it. I only wish you had reached out to us in advance if you had questions about the child policy, the conference itself, and sessions as I’m sure we could have given you the information you needed to have more success at the show.

Personally, this year was different for me on so many levels – for starters, I was nursing my baby boy in between sessions (with help from my husband who took off two days of work and flew down to San Diego to care for my son while I was in sessions), and further because my business partner and co-organizer of the conference had a baby herself just a few days before the conference and of course, was unable to attend (she was sorely missed by all!). I truly understand how hard being a parent is – trust me – but there is no group or community that I can think of that is more supportive of mom and dads. The fact that I was easily able to host the conference for two days, network with so many great community members, brands, and fitness professionals, breastfeed my nearly newborn son, and be able to attend all of the sessions and meet with so many great speakers really speaks volumes about the conference and the community.

Nice to meet you too Jamie – and congratulations on such a successful and well-planned event! I’m sure it was a lot of hard work to put it all together!

BTW – I saw some pictures of you with Colby and he is quite studly! I’m sure that both you and your husband’s faces are both hurting from smiling so much (I definitely had that feeling with both my daughters).

I actually thought I had inquired about child policy after I was given approval, but I obviously fell short of following through. I had thought I saw something on one of the sites about children under 2 being ok as long as they stayed in a stroller – but that must have been for a different event … I take full responsibility of not learning the child policy until after picking up my registration packet. I have since seen that info was covered in the FAQs online. Unfortunately my wife was not able to take time off to cover me and I wasn’t able to arrange other child care (although I still don’t like leaving Ava Kalea with other people).

Thank you for reaching out and again HUGE congratulations on a successful event and a beautiful, healthy baby boy!

Thanks Joe, we are certainly smiling a lot these days! Ava Kalea is very sweet and she’s lucky to have such an awesome dad.

Thank you Jamie! Ava Kalea is not always sweet – but she’s A LOT of fun – and her dad is the lucky one!

UPDATE: August 2, 2018 – I have been continually attacked and abused on the Blogfest Attendee’s Facebook page by members who did not agree with me – or appreciate my efforts and point of view. Despite the kindness of Blogfest Organizers and many other members who have reached out to me personally, the abuse and negativity from others were more than I signed up for and I had to quit the group. Lots of love, light and Aloha to all! In the words of the late Captain Stickey, “Onward and Upward”

Get Started Investing in Cryptocurrencies Like Bitcoin – and Get Free Money!