Reader Editorial: Where’s the Leadership Around Planned January 2019 Closure of SR 99 in Seattle? 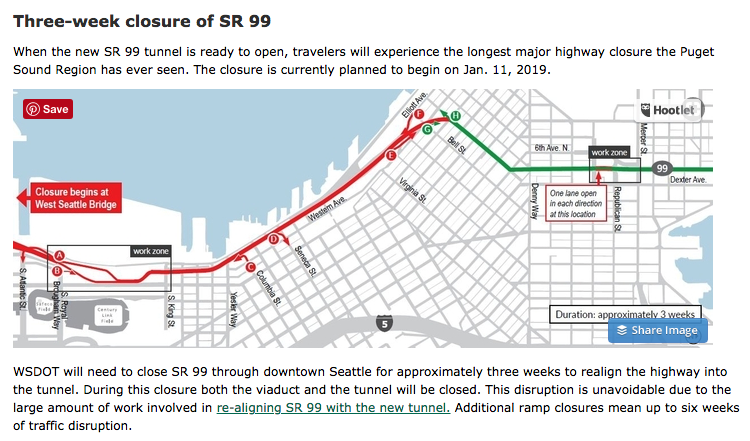 Dear Editor:
Hello. You may or may not have seen the friendly reminder emails that state of Washington plans to CLOSE DOWN a major north-south interstate hiway 99 in the middle of Seattle for (a minimum) of 3 weeks in January 2019 (the middle of the winter) while they tear down the viaduct and open the new toll tunnel. What is truly astonishing is that there is absolutely NO help from any government agency to help emergency providers, citizens, business and transporters that drive through this state, the Puget Sound region and the City of Seattle except periodic friendly reminders and a sad list of homey tips- if you happen to subscribe to email from WSDOT-Seattle Area Traffic News..
Where the hell is leadership and resources to get this state’s residents through 3+ week closure Hiway 99 viadict? INTERSTATE HIWAY 99 carries 100,000 cars a day. IT’S beyoe APPALLING. NO PLANS NOR no BUDGET FOR ADDITIONAL TRANSPORTATIOM MEASURES HAVE EVEN BEEN DISCUSSED.

This is it folks: http://www.wsdot.wa.gov/Projects/Viaduct/realign99 . See below for the list of friendly suggestions for geting through this traffic nightmare. And they promise ONLY 3 weeks? Really. Hmmm.
Where are the EXTRA BUSES that should have been brought into the region, staffed and ready to go along with the extra service and additional routes before this closure is put in place? NOTHING has been done. EXTRA TRAINS? NOPE. What’ coordination has been done with major employers to handle commuting traffic? Has the state/region/city reached out to small and medium business? How will this KILL business even further. How about small service providers. How do working mom’s get to daycare before they close? (Editor’s Note: although mom’s definitely have the toughest job in the world, ALL parents’s and citizen’s needs should be met).  What’s the EMERGENCY PLAN? What if we have THE earthquake?

AND What have we heard from our leaders? in a word: NOTHING.
Jay Inslee-Governor- ead of Washington Dept of Transportation: NOTHING. YOO-HOO, This project & closure affects the entire state and the entire federal interstate hiway system. (And the govenor is off seeking higher office??)
Washington State Legislature – NOTHING
Dow Constantine- King County Executive – NOTHING
King County Council – NOTHING (Mike O’Brien wants to issue costly traffic tickets if someone tries to take back streets-shame on you)
Mayor Jenny Durkan -City of Seattle Mayor – NOTHING
Seattle City Council – They hate all cars, so of course NOTHING
METRO-Sound Transit – happy to spend billions of tax and license fees – NOTHING

I find it so absolutely appalling given the cost we pay to support all these “helpful” government agencies that the only response to this incredible closure is cheerful little soundbites encouring citizens to join a carpool or ride a bike in January. Good grief. This is beyond abysmal.
-What if someone needs emergency transport to Harborview Hospital Burn Unit? Too Bad
-What if someone needs to get to SeaTacAirport to fly out immediately before someone dies, for a funeral, for a critical family event, or maybe for a happy one? Too bad.
-What about all the commuters, self employed businesses and construction workers that work in the city but live far out of town because they can’t begin to afford to live in or near the City of Seattle?
-What if we have an earthquake? Really too bad especially since the city has systematically reduced the number of lanes of almost every functional arterial running through the Seattle in their attempt to eradicate cars in the city.

So this is what we see from WSDOT/Seattle Area Traffic bulletin by email (if you subscribe)
(part of the notice given together with a happy reminder that WSDOT will close down the I-5 express lanes for a “Jingle Bell Run” for needy joggers.) Here’s the bulletin:

“SEATTLE AREA TRAFFIC NEWS- Washington State Department of Transportation
Historic full highway closure is just one month away
On Friday, Jan. 11, both directions of SR 99 through downtown Seattle will close for three weeks so crews can realign the roadwayinto the new tunnel. If you work/live/play in the area, now is the time to make plans to change your commute patterns during the month of January. Here are a few things that you could do to avoid gridlock: (no sign of leadership here)

• Shift your travel time to avoid the busiest times on the roadway.
• Bike or walk to work or school.
• Start or join a carpool.
• Start a telecommute program for employees.
• Use transit, particularly light rail and King County Water Taxi.
• Stay off the road: work from home, postpone discretionary trips, take time off.
• Be prepared for your new route when the closure ends and the new tunnel opens.
Ideas and resources:
• Ideas for changing your commute or travel habits.
• How WSDOT and partner agencies will help keep people moving during the closure.
• The closure in one overview handout.

Yep. That’s it. There’s the plan. 20 years of planning and construction for the most expensive public works project in the country and whoops, they apparently forgot how to provide how to get people through this nightmare traffic mess. Hopefully citizens are mad enough to vote these narcissitic, incompetent “leaders” out of office.

Publisher’s Note:  Thank you Leslie for taking your time to write about this situation.  This really is going to be a nightmare for many, many people and better planning should have and could have been done.